For part of our St Piran’s Day celebration and for longevity, we have created an interactive, family fun trail, around the town centre and surrounding area that celebrates the vibrant and innovative creativity of Redruth.

Tolgus Tracks was launched in February and will be live for one year. It is aimed at local families using the iconic mascot of Redruth – Tolgus the Lamb. There will be various Tolguses placed in 10 of Tolgus’s favourite places around Redruth with the ‘real’ Tolgus taking centre stage at the wonderful Library to mark the beginning/end of the trail.

The trail will be hosted digitally on Geocaching’s Adventure Lab app which allows participants to ‘collect’ their Tolguses, learn fun facts and stories about Redruth in a non-contact way using the location functions on phones and answer some simple trivia questions.

The inspiration of Gus is that it’s a community project; Liz who has recently opened the Wooden Box café started Happy Hookers and the same week this project was spotted on Instagram. The idea is sharing skills, bringing people together and supporting the community. She wanted to get together a few people who are very new to the area and so their chats allow us to share all the things we know about the town, places to go, good walks, where to eat, beaches that are quiet. They share stories and talk about Redruth of the past – some are Redruth born and bred so it’s great sharing all the stories. That’s really the inspiration behind their work, not so much Tolgus related but Redruth – although that’s one and the same!

Using needle-felting Kim has created a Tolgus which speaks of the past and future.

The Lamb and Flag symbol, from which Tolgus the lamb originates was known throughout the world as a sign of purity on the tin on which it was stamped. Whilst making a lamb from pure sheep’s’ wool seems particularly apt it also speaks of the simple beauty and purity of the material, echoing that of the tin, as well as connecting with Cornwall’s Farming heritage alongside mining. It is also appealing for its cuddly credentials!

Kim’s art practice is inspired by place and nature. She aims for her work to be as environmentally aware as possible. Kim’s Tolgus is made purely from ethically sourced sheep’s’ wool. And in theory is totally biodegradable as contains no plastic or other materials! 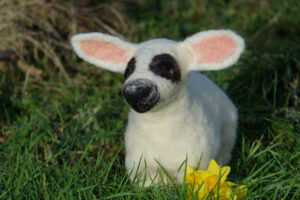 The willow and paper lamb and flag at The Art Room was built by artist Christopher Nixon and engineer Simon Beamont and has been named Withy – a traditional name for a willow branch used in weaving, building or basketry.

Their contribution to the Tolgus Trail was inspired by the beautiful sign outside the old Temperance Tavern on Alma Place. The history of the lamb and flag symbol is a really long one – Agnus Dei, the lamb of God, appears throughout the Bible as a symbol for Jesus who is both sacrificed and triumphant as he comes back from the dead having cleansed humanity from sin. This very Catholic symbol was used by the Knight’s Templar with their contradictory notions of purity and crusading; and much later it became a symbol used to indicate the purity of Cornish tin and as a sign outside drinking houses all over the UK.

Chris said he has always loved the mixed messages he gets from the lamb and flag symbol. The lamb depicts purity, but the raised front leg suggests marching, and the proud banner held above its head has a revolutionary air. It seems to be a perfect symbol for Redruth as it is has always been a town with a strong sense of kindness and community as well as a place of riots and rebellion. 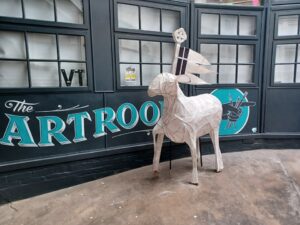 The inspiration for their Tolgus- Crafty, came from words that members expressed about what their group means to them. Some of the words that arose were friendship, positivity, stimulation, creativity, sharing, life giving, educational, encouragement, love and – above all – fun.

They felt that these words also reflected what we feel about being a part of the community here in Redruth. Each member of the group has contributed something to their “Tolgus” – be it a knitted square, handmade jewellery, felt work, beadwork, needlework, pompoms, buttons or card decoration. “Tolgus” is not only a collage of the many crafts in which our members participate but also an expression of togetherness. 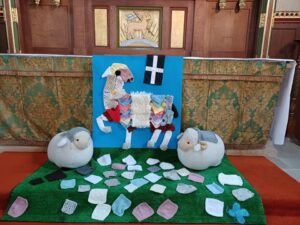 We had some great involvement from schools within in the area for Tolgus Tracks. We really wanted to get schools involved as it it’s a great way to reach out in the community, engage with young people plus we’ve always had such strong engagement with previous festivals.

In lieu of a parade, we wanted to be sure schools could be involved in the St Piran’s celebrations so reached out to them to see who could make a Tolgus. Even though it’s been a hugely stressful and uncertain times of the teachers, we worked with Redruth School, Treloweth and Pool Academy.

What was fantastic to see was the different approaches each of the schools took, ‘Pom Pom’ Tolgus, ‘Zentangle Tolgus’ and ‘Rugby Tolgus’, each unique, each a collaboration of creative young people and they’re amazing teachers.

The inspiration behind Brian came when Steve took his dog Rosie for a walk at Tolgus Mount. During his walk he thought about how the heart of Cornish mining is Redruth and Redruth is the heart of Cornwall. Paying tribute to Redruth’s heritage, this manifested itself as a tin heart. Brian’s Tin heart has wings which when open represent people being open to the heritage and culture of Redruth but when shut represent those who aren’t open to this with a broken heart. The very loud colours on Brian’s body brings him to the present day as art and creativity are prominent throughout Redruth today. To retain the tangible element that usually appears in his large wall murals Steve made his Brian 3D. A last-minute edition was Brian’s glasses. Once Steve heard that his Tolgus would be placed in Specsavers he thought it would be fitting for Brian to have some trendy eyewear himself. 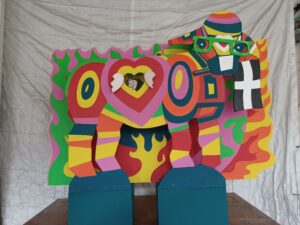 Although we refer to the Library Tolgus as ‘the real’ Tolgus he isn’t actually a real lamb. He is in fact a 6ft2 tall sculpture whom the library dresses up for different occasions. As St Piran’s Day is around the corner he is currently wearing his custom daffodil crown and St Piran’s Day tabard. 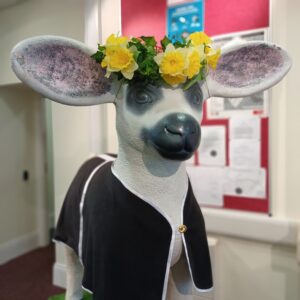 Unfortunately, due to Covid complications Trewirgie school were unable to make their Tolgus. This left a gap in the trail, so we stepped in and made Dolly last minute. We reused a cardboard box from a recent delivery and a few ‘Discover Redruth’ calendars that were in the office. Whilst we were the ones to make Dolly, the fantastic photographers who had photos featured in our calendar all contributed to Dolly. We then raided our craft supplies to set the scene add some final touches, including Dolly’s sparkly ears and big heart. 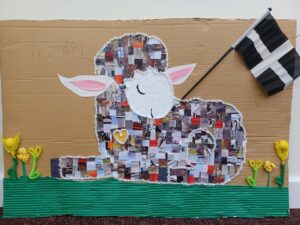 Want to join in the fun? Take part in the trail

The Funky Brownie Co is a small Redruth…

Walking is an easy and accessible way to…

Wow the first four months of this year…